My earliest memories of Trago Mills (Devon’s Original Discount Store) does not revolve around food or eating in Trago Mills.  But of railways, large shops and myriads of ducks.  Water canon side shows, a miniature railway and plenty of things to climb on.  As an adult, my memories of Trago Mills has become more sparse as I have tried my best to avoid it at all costs.    But the snobbiness of youth breaks when you realise you have no money and that actually, they have some impressive deals which are worth having a look at. 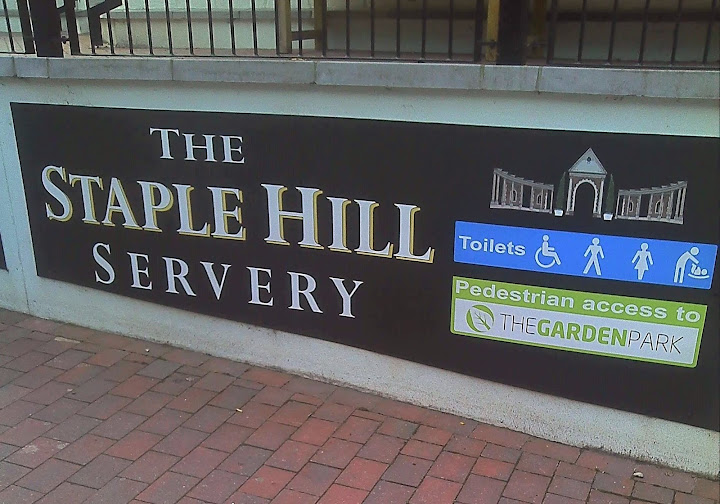 It is also one of those places where you find yourself with lots of things that you MIGHT need. We visited yesterday and I ended up with three paperbacks that I am unlikely to read this side of Christmas, but they were only 49p… which justifies it. Right? As it was we were heading over with purpose, and to have a look at their new-ish garden centre, a grand lavish affair that was vaguely reminiscent of The Crystal Palace with the faux-Bavarian castle architecture adorning it, so it didn’t look too much like a garden centre.  It was a good opportunity to wonder around, complain bitterly about everything and come home with some great bargains, because ultimately that is what one does when one goes to Trago Mills.

One of the endearing qualities of the place is that everything has a slightly hap-hazard feel to it, lots of bits have been added on to the site which means the layout of the site is a bit odd.  Over the last few years they’ve invested in expanding the leisure side of things and also the Garden Park which has to be (imho) one of the most elaborate and well constructed garden centres in the region. We wandered around a new ‘Animal Park‘ which consisted of mostly rabbits, guinea pigs, donkeys, ducks, pigeons and a couple of pigs.  Not to mention the scruffy looking parrots.  Never quite understood the obsession with ducks, anyhow.

I insisted on visiting the model railway which is a vast expanse of wonderful wonderful OO gauge.  It hasn’t changed at all since I was there last 10 years ago.  And after such excitement we needed to eat something. As I mentioned, the thing that doesn’t spring to mind about Trago is the food.  In my head, if I go to Waitrose or even Sainsburys, I know there is a cafe there that I can have a cup of tea in, or even get some lunch should the moment take us.  Bernaville Nursuries on the Crediton Road has a lovely little restaurant where you can have a cuppa and some cake.

Up to yesterday if I thought ‘Eating at Trago Mills’, I thought of take-away chips and burgers from the stands outside the main shopping area. Now, thanks to the Staple Hill Servery I can think about Trago and their £4.65 All Day Breakfast. 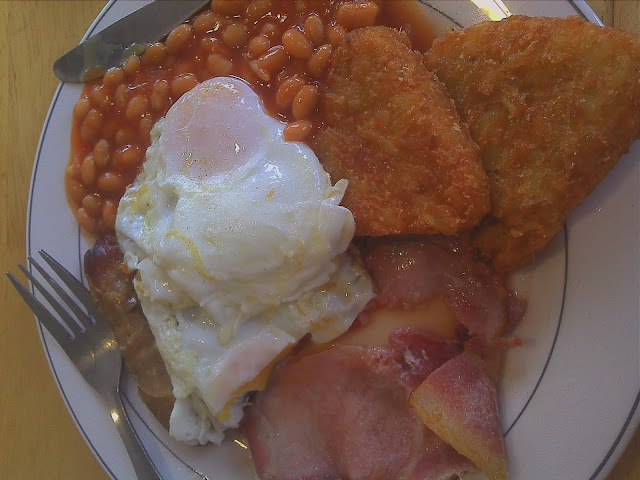 I was amazed and delighted that the Restaurant Complex, as they’ve snappily called it, has been built.  It encompasses another take-away, a tea room and a main restaurant that is reminiscent of the restaurant in the Royal Devon & Exeter Hospital.  It has been much needed, given that Trago has been trying to market itself as a ‘destination’ for years

The Staple Hill Servery is a large restaurant with airy windows and lots of light.  The amount of daylight that was coming through in to the dining space was brilliant, and even as just somewhere to sit and have a cup of tea, it was a really nice space. Before you walk in you’re confronted with the menus.  One on the outside and one inside.  Its not a complicated menu and is almost reminiscent of a Cafe menu rather than a ‘restaurant’ as such. The second thing you notice is the prices.  Being technically an ‘in-store’ restaurant they can afford to subsidise and keep prices low.  Cups of tea were all under £1, coffee wasn’t much more. 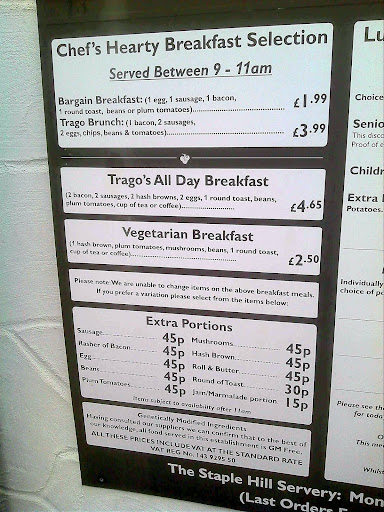 I went for the All Day Breakfast which included a cup of tea as well.  In this you get 2 sausages, 2 bacon, 2 eggs, 2 hash browns, Plum tomatoes, beans and a slice of toast.  All for under a fiver.  The feeling about this was that it was going to be terrible, and it wasn’t.  Bad side of things being that it was all kept in hot cabinets, but the eggs were cooked to order. 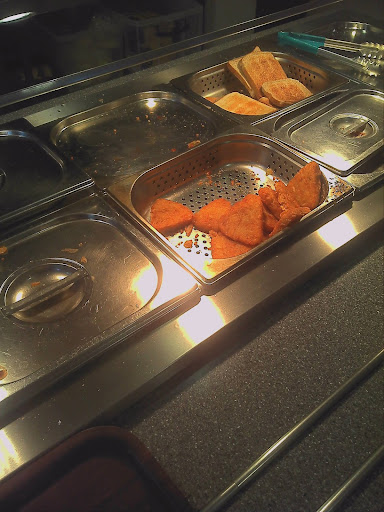 The food area layout wasn’t particularly easy to work out at first but it didn’t take too long to work out where things were and where you needed to be.  Obvious things like hot food was served from a counter with an open kitchen behind it.  The service seemed a little frantic at this counter as they were busy, but I wanted a breakfast which was at a different counter.  The girl behind the counter was kind and quick with her service, not rude or abrupt.
So, I have my breakfast now where?  Hot drinks had the tea bag already in the pot (type of tea? most probably best not to ask).  Then off to the till to pay.  Service at the till was functional, not polite, not rude, when asked where Ketchup and that sort of thing was he pointed to the other till which meant we had to queue up twice, as there were no sachets of sauce at his till.  Cos that’s logical isn’t it? He did not offer to get one for us, or even give us a chance to grab one to add to the bill.  Small things like this do matter sometimes.

Given Trago Mills has a slightly 1950’s approach to Debit and Credit cards, don’t walk in here with one, I didn’t ask whether they were accepted or not (which I should have in my journalistic naivety), but you’d be best to take cash.  Trago Mills on the whole won’t accept card purchases under £10, which as a policy in this day and age is quite, well, 1950’s.  But then who am I to comment? I write about food.

The food was lovely and tasted like something that I would have paid at least double for.  The eggs were a bit greasy, but the rest of it was good hole-filling food which tasted of good quality ingredients.  The whole experience apart from the complete lack of empathy from the till staff was one I would repeat again.  The toilets were immaculately clean, although the stairs down to them are a challenge if you’re not mobile (couldn’t see the disabled toilet?).  The place felt clean, there were no dirty tables when I sat down and the staff were going through cleaning the tables.  There also seemed to be at least two members of staff on table duty when i was there which is a good amount, but there are a LOT of tables.  But I know that Trago can get very busy, so come back at peak hours and it might be a different experience as it would be with any restaurant under pressure.

The Staple Hill Servery is recommended if you’re after something to fill a hole for little money.  Trago Mills as a place to visit on a day-out is pretty much the best place to come if you’re on a budget as you pay for what you use.  If you buy anything great, if not you could essentially visit the Animal Park for free if you wanted, although it wouldn’t be much fun as they were all asleep when we visited.

Best times to visit: Weekdays (Not in holiday season).

Bad: Pay for sauces, till staff manner, stairs to toilets.